Between the years 2001 and 2005 I managed the content for Bladezone - during that time I edited more than a dozen articles. Although the words were usually someone else's, the article presentation was left to me.

I also composed the newsletter for a while and managed the forums, which I moderated and upgraded several times.

I stopped managing the site towards the end of 2005 and it's still being actively updated today. But while the content is interesting, the presentation suffers from the same issues that it had when I was managing it. I think the site would benefit enormously from a face-lift - there's a lot of great articles on that site, but they are all hand-coded HTML pages and dont have a consistent style.

Before I left, I formulated a plan to move the content into a dedicated CMS (Joomla) so that we could standardise the style and layout of content across the site - unfortunately, I was unable to persuade the site owner of the advantages, so I decided to walk away and pursue other projects.

I created a windows screen saver using Dark Basic - it was basically an image slide show that would transition from one image to the next by simulating the zoom effect shown in the film where Deckard is analysing Leon's photo on the Esper mainframe.

I've no intention of distributing it now, as I'm no longer associated with Bladezone and the code is so old, I don't wish to support it any more.

Here's a video demo of the screen saver running, so that you can at least get a feel for how it would have worked.

I used to create and maintain the movie image library for Bladezone and the desktop themes and wallpapers section. I thought it only fair that I contributed some of my own work to the site and have also made it available here.

These four images represent some of my favourite lines from the movie. I actually put them together for a windows screen saver that I created, but I have found they make nice wallpapers too.

As well as processing the article images (cropping, color balancing and re-touching), I also created quite a few banner graphics to go with the articles. Here's most of them - I used Adobe Photoshop Elements to create most, if not all of them.

My favourite ones are 'Spinner Rising' and the 'Gene Winfield Visit 2002' as these required a little more effort than simply titling a cropped image.

I've resized the images to the same width to improve the page layout. They are listed in no particular order. 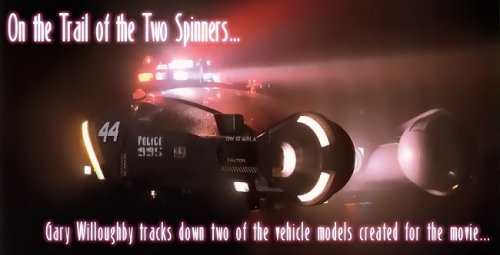 I Can See Clearly Banner