Between 2001 and 2005, I was managing Bladezone and had spent a lot of time discussing the film in the Bladezone forums and also reading several of the books available on the subject.

So, I had the idea of creating a quiz application for all Blade Runner fans to test their knowledge.

I originally implemented the application in javascript with the intention of adding it to the Bladezone website, but then decided to convert the project into a standalone executable written in Blitz Basic and developed and tested on Windows XP Home Edition.

The final version was to have a global score board and question sets downloaded from the internet.

In the end, I left Bladezone and lost interest in completing the project.

I have no enthusiasm for completing the project in it's current form. If I was going to continue the project, I would probably go back to a javascript version - the browsers of today are much more capable than the browsers of 2001.

I would estimate that the project is probably in the region of 60% complete.

This is one of those projects that I could never seem to get the momentum up long enough to finish. I would shelve it, move onto something else and then re-visit it a year or so later.

While recording the video demo, I took a screen shot. 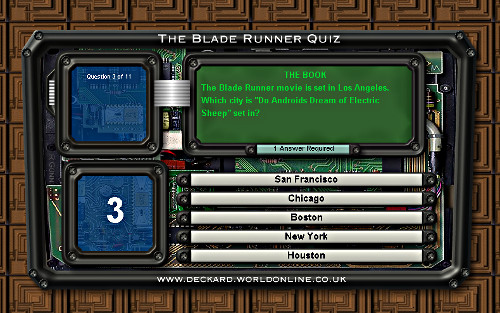 I created a video of the quiz machine running on my old Windows XP machine. The sequence shows a very small (and easy) question set that was designed primarily to test the different question types.