In December 2000, I decided to have a go at modelling something fairly complex in POV-Ray. This was going to be my first project and as I had already decided that I wasn't going to use a 3D modeller, I chose the Tyrell Building (pictured below) because of it's straight lines and symmetrical shape would be relatively straightforward to describe using POV-Ray's own scene description language.

Up until recently, my only reference for the building shape and detail were the images that I had grabbed from the Blade Runner DVD (image to the left). I now have a copy of Don Shay's "Blade Runner: The Inside Story" to work from which contains several detailed photo's of the Tyrell Building model used in the film.

In the end, I abandoned the project leaving the current state somewhere between 40-45% complete. It became obvious that hand-coding geometry wasn't the right way to go and it was about this time that I discovered Wings3D which can export to POV-Ray and made creating 3D models so much easier. POV-Ray is an excellent ray-tracer, but it ought to be used with a modeller to get the best out of it - used it to render my steam engine model. 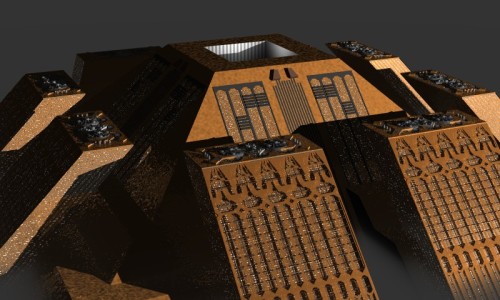 One of the final renders (image to the right) I ran before abandoning the project. Every aspect of the this image is hand-coded. The geometry was worked out on paper and transformed manually using POYRAY's scene description language, the lights were positioned use hand-coded co-ordinates and even the textures were generated using hand-coded parameters.

Working 'blind' like this is definitely not the way to create rendered images, but it does help you to visualise a 3d space in your mind while working on a project.

I thought I might come back and restart the project using Wings3D to model the building and bump-maps to fake the detail, but I haven't yet.