Ubuntu and the Kobo Touch

I recently bought a Kobo Touch eReader and I’m very happy with it. But, as usual, I did have concerns about the software supplied with the device, because yet again, Linux has been over-looked.

The official software can be downloaded from the Kobo website and is Windows and Mac compatible only, which didn’t surprise me at all, but did make me wonder if I would have to re-install Windows on my Linux laptop in order to get the best out of the Kobo. Fortunately, that’s not the case.

I’m currently using Xubuntu 12.04 on my (ageing) Toshiba Satellite Pro A10 and the Windows version of the official Kobo desktop application runs without issues under WINE.

In order for the desktop application to detect the Kobo eReader while running under WINE, you do have to make a tiny change to the WINE configuration settings:

When you connect the Kobo eReader to your computer via the supplied USB cable, it will appear as a folder mapped to "/media/KOBOeReader" - in the WINE configuration 'Drives' tab, you need to map a drive letter to this folder. I chose the ‘K’ drive. 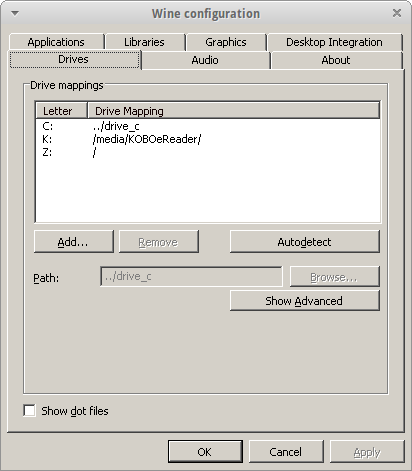 After you restart WINE, the Kobo desktop application should now be able to detect when your Kobo eReader is connected.

It quickly became obvious that the official desktop application was a little limited, so I looked around for appropriate Linux applications and found Calibre eBook Manager. This application has lots of options and is customisable through it's built-in LUA interpreter.

So, I stopped running the official kobo desktop application in favour of Calibre, but then a few weeks later, something else occurred to me - how do I update the Kobo Touch firmware if I don't run the official desktop application? I'm embarrassed to admit that several hours later, after considering all the options, I discovered that the device can update it's firmware directly through it's Wi-fi connection!